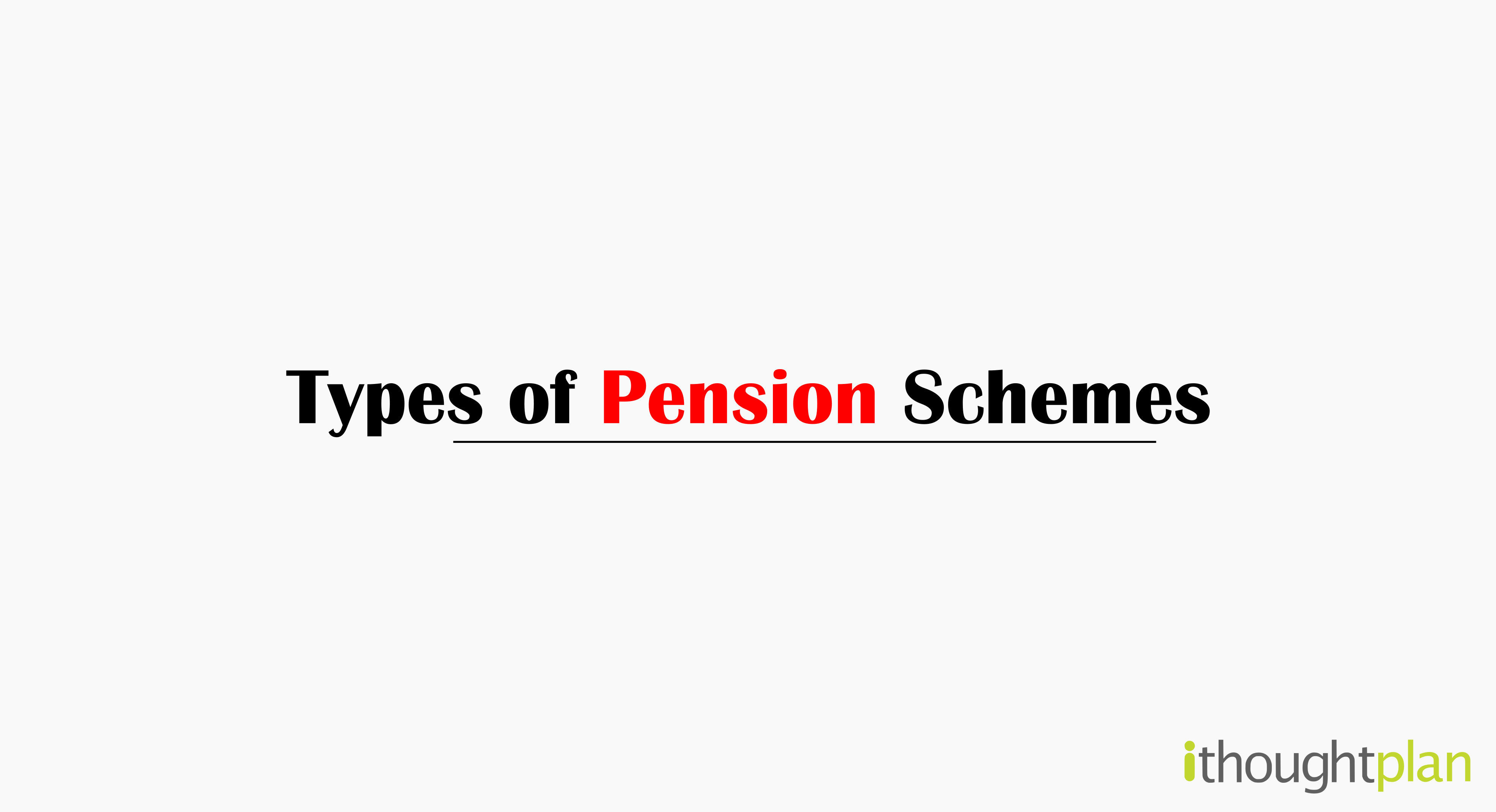 What is a Pension?

A pension or an annuity is a fund that you purchase to receive a regular stream of income from. Income from pensions are guaranteed and make an attractive investment opportunity for retirees. There are many types of pension schemes one could choose from. Pension plans can be categorized based on timing (when the pension is received), the term of pension, insurance cover, and holders. Read on to know which pension schemes are right for you! 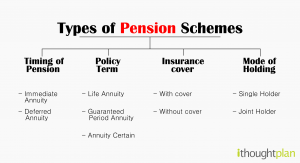 Pension Schemes Based on Timing of Pension

In this type of scheme, the pension or annuity begins right away. This is suitable for those who have started their retirement plan.

In a deferred annuity, pension payments start after the payment term is over. The payment term may involve a single premium or a series of regular premiums through the policy term.

This annuity offers regular income to the annuitant throughout his/her lifetime. No payment is made to the beneficiaries after the annuitants’ death.

Pension Schemes Based on Insurance Cover

A without cover pension plan only pays a regular pension through the policy term.

Pension Schemes Based on Mode of Holding

A single holder annuity pays a pension to the policyholder for the defined policy term. 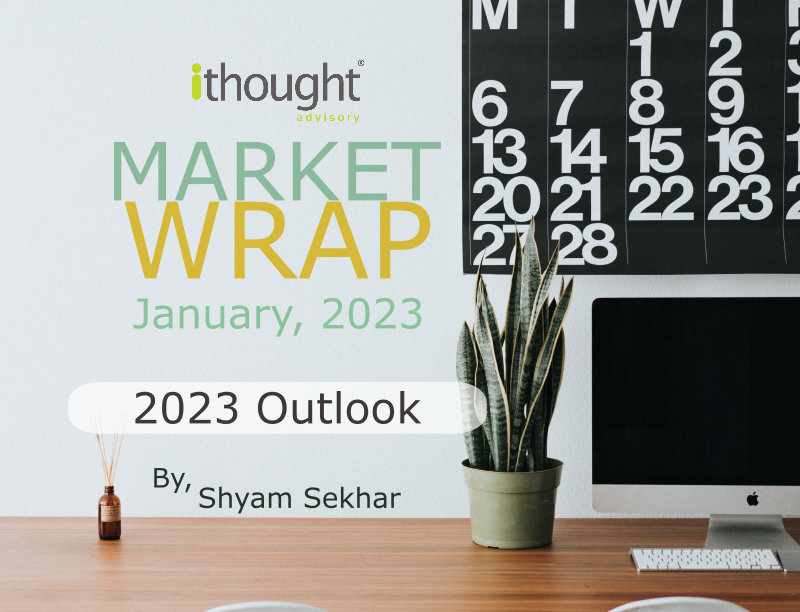 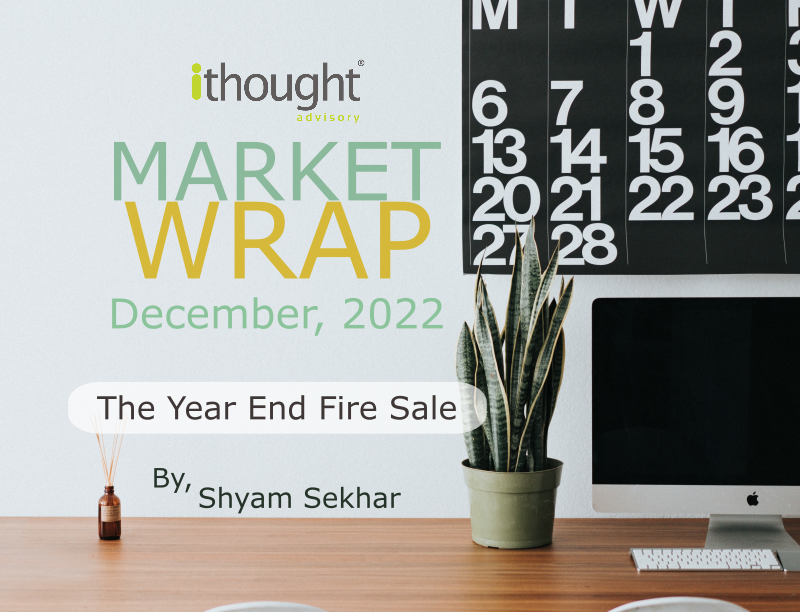 Harshil is a Business Administration Graduate from Loyola College, Chennai. In addition, he is a CFA (Chartered Financial Analyst) Level 1 candidate. Harshil has an avid interest for financial markets and hunts for new opportunities. Having developed interest in the financial markets at an early age, he utilises his knowledge to develop sound investment strategies.

Janaki Raman holds a bachelor’s degree from Dwaraka Doss Goverdhan Doss Vaishnav College, Chennai specialising in accounting & Finance. He has a wealth of experience working with BNP Paribas in Investment banking domain specialising in the Paris and Euro region before joining Ithought. He has also completed his CFA Level 2 as well as NISM exams. He loves all things finance with a keen interest in Personal finance and investor psychology.

Ganesh is a Qualified Cost and Management Accountant from the Institute of Cost Accountants of India and is an Affiliate of the Association of Chartered Certified Accountants, UK (ACCA). He has 4+ years of experience across Equity Research and Business Finance.

Ganesh is the Product Manager of the PMS team at ithought. His functions include Product Marketing, Business Relationship Management and Operations Management. Prior to joining our PMS team, he worked with the India Cements Limited where he handled the Business Finance function of the RMC division.

Susithra holds a PGDM degree from Narsee Monjee Institute of Management Studies (NMIMS), Mumbai. Before joining ithought, she worked as a business valuation consultant at Deloitte USI in their advisory vertical.

Susithra has also completed the CFA Level 1 exam and level X Investment Advisor exams from NISM. She is currently pursuing CFP certification. An avid reader, she is passionate about personal and behavioral finance.

Rajat has ~13 years of experience and over 10 years of experience in public markets. He has previously worked with companies such as Elevation Capital (previously SAIF Partners) a sector and stage agnostic fund, RARE Enterprises – Mr. Rakesh Jhunjhunwala’s family office, Moody’s Analytics.

Balaji MK is a Postgraduate in Finance and has an experience of 16 years spanning across Roles in Financial Services Industry. He has worked with organisations such as Standard Chartered Mutual Fund, Chola Mutual Fund, Reliance Mutual Fund, Citi Bank and ICICI PRU Mutual Fund.

Balaji MK has worn many caps – Retail & Institutional Sales, Product Specialist & Investment counsellor (IC). He has keen interest on Various Marco economic development and how it effects various segments of the economy.

Balaji is a passionate equity investor with 14 years’ of experience in financial markets. He has in depth expertise across various functions in Asset Management and Wealth Management. Balaji is an MBA Finance Graduate who has a keen interest in stock markets and has been investing since college days. He is an active speaker in public forums including Tamil Nadu Investor Association, SEBI Investor Meet, etc. Balaji is also a regular columnist at The Hindu. He voraciously reads annual reports and books about investor behaviour. Balaji is involved with research and fund management at ithought.

Client confidentiality is of paramount importance to ithought Financial Consulting LLP. All the client information that we collect is solely for the purpose of understanding client needs and for legal compliance. We do not share the client’s identity or client’s personal information with any third parties for any commercial reasons.

We may, if required by applicable law or regulations, disclose the identity of the client to any Government or Regulatory body, without further consent from the client.

Jayalakshmi holds a bachelor’s degree in commerce from S.D.N.B Vaishnav College, Chennai.
Before joining ithought she worked in multiple organizations such as GE India Limited and Sreedhar, Suresh and Rajagopalan Chartered Accountants. Through her experience, she gained deep knowledge in distinct areas of accounting and taxation. She has also completed the Investment advisory qualifications under NISM (National Institute Of Securities Markets). She enjoys learning new things and possess a go-getter attitude and intends to channel these skills and move ahead in the career graph. She loves playing badminton and is an aspiring chartered accountant.

Gaurav is a qualified Chartered Accountant with 7+ years of experience in capital markets, personal finance, auditing and taxation. He has been with ithought for the last 5 years and is currently part of the PMS team and assists the CIO in managing the company’s Solitaire Fund. He is also a part of the financial planning team of ithought. Prior to joining ithought, he worked with two Multi-National Companies in their accounting advisory and financial control team.

Niranjan is an applied Mathematics Graduate from the College of Engineering, Guindy. In addition, he has cleared the FRM (Financial Risk Manager) certification exam from GARP (Global Association Of Risk Professionals). Niranjan has an avid interest for financial markets and has been following equity markets since his school days. He has been an active investor for over sixteen years. Niranjan has been involved with strategy at ithought for over seven years now.

Prasath Raj has been with ithought from inception and has over twelve years of experience in financial markets. He is a Commerce Graduate with an MBA in Finance. He is also a derivatives specialist and has extensive knowledge on equity shares and mutual funds. Prasath is a voracious reader and leverages his extensive knowledgebase to provide unique insights. He utilizes these competencies to formulate sound investment strategies for our clients.

Ajay is a commerce graduate from Loyola College, Chennai and has been working as a relationship manager with ithought since 2010. During his time here, he has developed a keen interest in value investing and financial planning. He is known for his warmth and is committed to client service. Ajay is also a professional cricketer and is passionate about traveling.

Amit Parakh is an engineer by design and a personal financial services advisor by passion. He has a wealth of experience in the financial services industry. Amit has spent more than two decades working with banks, asset management companies (AMCs), and financial advisory firms. After having worked with HSBC, HDFC SLIC, and ICICI Prudential Mutual Fund on Sales Strategy, Product Communication, and Distribution, Amit was keen to transition to the client facing side and help clients through their financial journeys. His value systems in client service are closely aligned with ithought’s and he joined us in 2015.

Maruthi has an engineering degree in Electrical & Electronics from VIT University. His first position was with TCS Ltd where he worked as a developer for a leading UK Bank’s Investment Banking Division. He followed it up with PGDM from IIM Ahmedabad and worked in sales & business development roles for two years in Healthcare and Real Estate firms, before joining ithought in 2015. He is a dedicated relationship manager focused on improving client experience.

Rashmika graduated from Ethiraj College for Women with a Bachelor’s degree in Commerce. She is a conscientious and meticulous professional. Prior to working with ithought, Rashmika worked at Goldman Sachs.

Roshan acquired a bachelor’s degree in BCom with specialization in Finance and Accounting from Vivekananda college prior to working with us. He is currently pursuing the CFA (Chartered Financial Analyst) charter. Roshan has a keen interest in financial markets and is passionate about value investing. He works with our Debt and Equity strategy team. Roshan is an ardent football fan.

Abhishek graduated from IIT (ISM) Dhanbad in Electrical Engineering in 2017. He is a Level 2 candidate of CFA (Chartered Financial Analyst) certification and successfully cleared the CFP CM (Certified Financial Planner) certification exams. He is interested in valuing businesses and investments. He also likes to explore the streams of Economics and Finance theory. Abhishek is adept at using the amalgamation of theory and practice to identify opportunities and manage risk.

Shyam Sekhar is the ideator and founder of ithought Financial Consulting LLP. He is an active and renowned value investor with over 30 years of experience in financial markets. His focus as an investor has been on identifying investment opportunities in emerging companies through a sound research driven process.

Shyam Sekhar also built the first independent proprietary equity research desk in Chennai. He is an advocate for investor awareness. He was president of Tamil Nadu Investors Association (TIA) from 2012-2015. He is an active speaker in public forums and is a regular columnist at Dinamalar and Livemint.

Personal finance is the most important thing for every individual. It must be personalised, planned, prioritised, and perfected. Who is best placed to do this well? A financially savvy person is sure to help himself. But, what about everybody else? Surely, every one of us deserves to see our hard work show up as money. And, that money must be turned into sustainable wealth. So, somebody needs to ensure that even those not keenly aware are guided to building sustainable wealth.

To me this could never be a business. It was and will always be a fiduciary role. It must be so. It was something I always did for family and friends. But I felt strongly that this could be done on a larger scale and style not seen before. The need existed.

The year 2009 seeded the idea of a professional firm focused in the personal finance space. Over a decade, we have gradually built independent teams, multi-disciplinary domain expertise, multi asset advisory practises, and an overarching customer centric culture.

I have learnt much more in this decade as an advisor than I did in my previous two as an investor. Today, ithought has strong domain expertise in financial planning, mutual fund research, investment advisory, equity research, equity advisory, and portfolio management. We are now a SEBI registered investment advisor and SEBI registered portfolio manager. From 2009, evolution has been a constant in ithought’s journey.

ithought stands committed to you, your aspirations, your interests and your financial freedom. Your journey is as much ours. And, we will stay that course till you reach your destination. Better times are ahead of us.